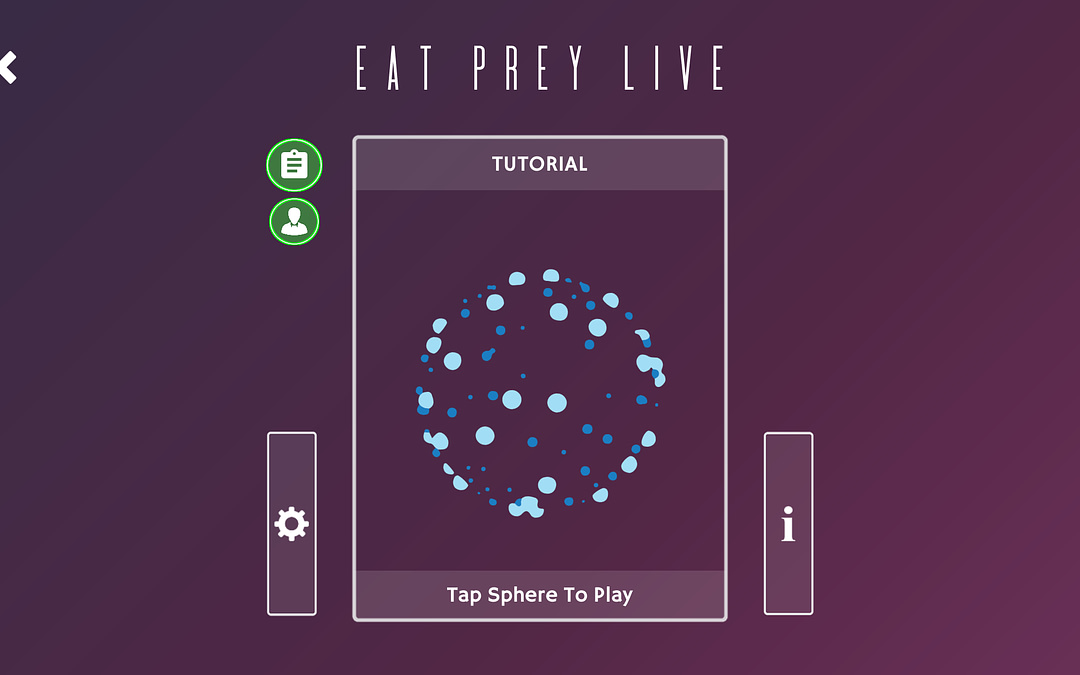 Eat Prey Live is the third game we will play during the Ingenious program. This week will build on our understanding from the previous two weeks.

This app allows students to experience evolution first hand. Using the app, students can create a population of dots with different traits that they will hunt. As they squash their dots, some of the dots will survive and reproduce and they will see the population evolve over 10 generations.

Like you will do each week, ask your students to log into the eWorksheet using their Arludo ID. When asked, please also ensure your students log into Eat Prey Live with their class code (at the top of their worksheet) and also enter their Arludo ID in the Player ID settings. This way, you can keep track of their performance yourself in your Teacher Dashboard and they’ll be able to see their population appear on the dashboard so you can compare populations.

One thing that may help you understand how evolution is occurring is by watching the tutorial at the beginning. You can tap the word ‘TUTORIAL‘ at the top of the screen to view that video.

As a side note, this is a game where students can work in groups with a single device. This way, they can take turns and also chat with each other to better understand what is going on.

As they play through the round, they will see the results of who survives at the end of each round. They can follow the survival of their dots through 10 rounds (generations). Remind them that it’s the surviving dots that have offspring, and those are the dots in the next generation.

Below, I will explain how to understand the figures that are created in your worksheet. I will also explain what to expect to happen to your population given the different traits you can select.

How to read and use the figures

Below are two figures that were created in our test class. These are histograms – they are different classes of dots on the x-axis that are either different in speed or agility. On the y-axis is the count of the dots that fit in that category. In each of the figures, you will have the opportunity to select which figure you would like to display from students. by using the drop down menu (the blue downward arrow under ‘Player’)

If you select the player ‘Double Sunday‘ on top and ‘Zoink Doinkus‘ below, you will get two graphs that we can explore. you can see that the traits the students selected are stated in the header. For Double Sunday, the student did not allow mutations, selected a population of 10 dots with no correlation between speed and agility, and that there was no cost to missing a dot.

For Trish Biscuits, the student did allow mutations, selected a population of 25 dots with a low correlation between speed and agility, and that there was no cost to missing a dot.

For this comparison, we’ll focus on the fact that Double Sunday had no mutations, while Trish Biscuits had mutations. Now we can compare the results. The first thing you will notice is that the speed (in pink) of Double Sunday‘s dots stops at 4 while there is a much bigger spread in the distribution of dots for Trish Biscuits. This is the case for both Speed and Agility.

This is because when you don’t allow mutations to happen, there can never be new types of traits that randomly appear. Mutations are one of the few ways that new genetic variation is added to a population. If no new variation is added, then the population can never change from what exists. This is why the numbers never get higher that the highest number that existed at the beginning.

But if you allow mutations to happen, then by chance, there will be some dots that mutate and change into different speeds each generation. This creates new variation and can change how the population looks. This is because the faster dots are harder to kill and are more likely to escape. That means that students should easily kill the slow dots and the dots should keep getting faster each generation. This way you can see your population evolve each round (generation)!

Below, I will discuss what to expect with each of the different variables

Do you want dot speed and agility to mutate?

By allowing mutations to happen, your dots have the potential to evolve and respond to selection. In this case, selection is the students that are squashing the dots. Because each student will vary in their ability to squash the dots, they create different selective pressures on their populations.

In short, when you don’t allow mutations, you will often see a single bar because that is the last dot they squashed. If you do allow mutations to happen, they you will see the dot speed evolve because you are slowly squashing the slow dots and preventing them from breeding. That means that only the fast dots breed, and because of the mutations, they can by chance turn into even faster dots.

The choices here are 10, 25, or 40 dots. What this category helps your students understand is a topic called Genetic Drift. What this means is that selection – the act of squashing dots in this case – acts differently depending on the population size. It also means that there is a greater chance of losing a particular speed type when the population is smaller than when it is larger.

This is why the player Double Sunday had their only dots at a speed value of 4. Even though dots at the speed of 4 move relatively slowly and are easy to squash, they ended up surviving by chance because there were more dots of speed 4 in a population of 10 them there were dots of the speed 7. That means that – just by chance – a student could kill a faster dot and because there are only a small number of them (1 or 2 dots of that speed) then if you are lucky once, you can wipe out that speed category and remove them from the population.

How are dot speed and agility related

It’s the opposite for a negative correlation – as dots get faster, they get less agile. So a dot with a speed of 10 will have an agility approximately agility of 4.

For no correlation, it means that the speed and agility of dots are not tied together. In other words, a dot with speed 4 could have any agility value.

Will you lose energy if you miss a dot?

This is an extra section if students are really keen. When this option is chosen, students gain energy when they successfully squash a dot, but lose energy when they miss. They can also change the cost of missing to 1, 3, or 5 energy points. It means that students can run out of energy and die before reaching the last generation.

If you give the students the goal of surviving until generation 10, you will find they will become much more selective on the dots they try to kill. They will no longer try and kill the fastest dots. What that means is that the cost of hunting is weakening the strength of selection. Whey this is selected, it’s unlikely that the dot speeds will evolve as quickly and as far to the right.

There is a lot of opportunity to do more here as long as students are willing to squash dots! But this is why I mentioned that it may be best for students to work in groups. This way, they can take turns. Additionally, each group can have a different experiment.

Along with manipulating the traits of the organisms (the dots), you can also manipulate the traits of the hunter (your students)! Think of ways that you can change how hunters hunt. If you give an example (like using your left hand) then students will quickly start thinking of really cool ideas.

Here are a few ideas I’ve received (but don’t limit yourself to these!):

The important thing of this game is to relate things back to the four principals of evolution: Hertiability, Variation, and Selection. The idea about these three concepts is that traits that parents have are heritable – that’s why we look more like our parents than strangers. Our DNA makes sure that information from our parents is passed to offspring. In this game, a dot is more like the speed of their parent than some other random dot in the population/

The idea is to explain why the final distributions in your figures look the way they do as a result of these three principals. Understanding that means you have an excellent grasp on how evolution works.

We use cookies on our website to give you the most relevant experience by remembering your preferences and repeat visits. By clicking “Accept All”, you consent to the use of ALL the cookies. However, you may visit "Cookie Settings" to provide a controlled consent.
Cookie Settings Accept All
Manage consent

This website uses cookies to improve your experience while you navigate through the website. Out of these, the cookies that are categorized as necessary are stored on your browser as they are essential for the working of basic functionalities of the website. We also use third-party cookies that help us analyze and understand how you use this website. These cookies will be stored in your browser only with your consent. You also have the option to opt-out of these cookies. But opting out of some of these cookies may affect your browsing experience.
Necessary Always Enabled
Necessary cookies are absolutely essential for the website to function properly. These cookies ensure basic functionalities and security features of the website, anonymously.
Functional
Functional cookies help to perform certain functionalities like sharing the content of the website on social media platforms, collect feedbacks, and other third-party features.
Performance
Performance cookies are used to understand and analyze the key performance indexes of the website which helps in delivering a better user experience for the visitors.
Analytics
Analytical cookies are used to understand how visitors interact with the website. These cookies help provide information on metrics the number of visitors, bounce rate, traffic source, etc.
Advertisement
Advertisement cookies are used to provide visitors with relevant ads and marketing campaigns. These cookies track visitors across websites and collect information to provide customized ads.
Others
Other uncategorized cookies are those that are being analyzed and have not been classified into a category as yet.
Save & Accept
Powered by