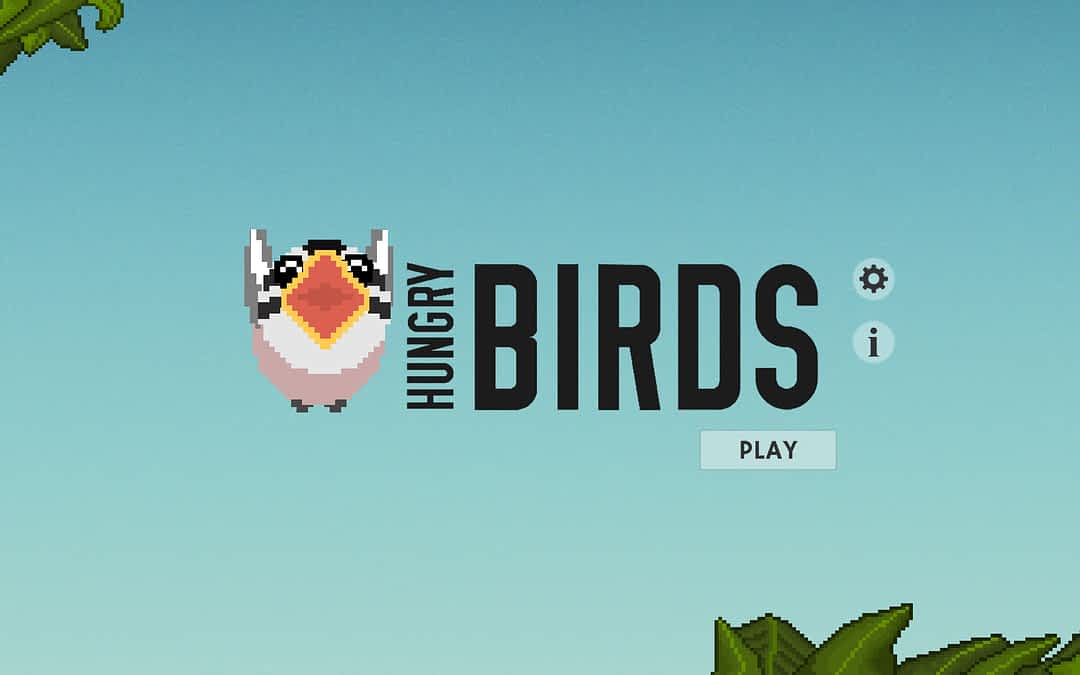 Hungry Birds is the second game we will play during the Ingenious program. This app teaches students the difficult decisions that parents have to make while raising offspring.

In this game, students are parents that are trying to raise all their offspring. But different hunting locations and the predators withing make finding food difficult. As such, students will have to figure out how to best use the energy that they collected to survive and raise the most offspring they can.

Like you will do each week, ask your students to log into the eWorksheet using their Arludo ID. Rhis is the same alias they will use each week so you can keep track of them. When asked, please also ensure your students log into Xenon Crowe with their class code (at the top of their worksheet) and also enter their Arludo ID in the Player ID settings. This way, you can keep track of their performance yourself in your Teacher Dashboard.

Once your students have entered their class code and their Arludo ID, they’re ready to play! We encourage students to talk to one another and give each other tips on how best to catch food and raise offspring.

Hungry Birds is very similar to the game Flappy Bird – students have to tap the screen to keep their bird flying and avoid obstacles while collecting food.

After each round of searching for food, they will return to the nest and have to decide how to feed their offspring with the limited resources they collected.

You should aim to have between 2-3 play sessions. After your students have played a round, you can move on to the second YouTube video where you will see Fonti and I play as well. It’s up to you whether you let your students play along during the video or after the video. We’ll be looking through some of the data in the video together.

Let’s take a look at the data

One thing I want you to undestand is that you may have different patterns because of the different choices your students make. However, viewing these graphs below will at least prepare you for the discussion with your students.

Like Xenon Crowe, Hungry Birds has a leaderboard for those more competitive students.

You can use this leaderboard as a means to start a conversation. Here are some examples:

How often students chose each site

Use this as an opportunity to discuss the different ecological environments and the challenges faced there – why were there favourite locations? What does that mean for how animals behave? Could we use this understanding – that there is food in a particular environment – to understand why real animals behave this way (think of ibises and their preference for rubbish bins).

You can also ask students what they would predict would happen is in the next graph – what should we see with the number of bugs caught in each of the locations?

Remember to discuss both the differences within a location (the first and second time students played) and the differences between locations (just looking at the red and green bars individually). Each of these aspects tells a different story and challenges your students to understand what the data are telling them.

The number of insets caught at each location

With this graph, you can discuss whether students were making the best choices. Students collected the most bugs in the forest – is that the location they spent the most time in? The mountains and the Ocean were the worst locations, why was that? Were the challenges particularly difficult there?

Again, make sure you discuss the within and between differences in the data to understand the story that is being told both at each location and between locations each time students played.

Does the number of bugs eaten affect fitness?

This graph makes that connection that students were likely already talking about. This graph shows how many offspring they had survive – that is what fitness is. This is a term that biologists use to explain t=how many offspring an organism left behind. And on the x-axis is the number of bugs that a player caught.

So this time, the graph is not plotting averages (as in how many bugs were caught in each site) or totals (as in how many times each location was chosen), but it is plotting each player’s data on how many bugs they caught and how many of their offspring survived. What you’ll notice is that the students that caught more bugs had more offspring. And that’s in both the first time and last time they played.

This is the first time they have seen a graph that with continuous data on both the x and y axes. This is their first linear regression. Make sure they understand that each point is their performance.

You can use this graph to make sense of the decisions that students made to visit each of the locations – if offspring survival depends on the number of bugs caught, then students should be selecting the sites with the most bugs. Were their predictions correct? In a sense, they were learning to go to different sites because those sites offered the most rewards.

This is where you could extend things into real animals – do we see animals learning in this way? When you go amping, do you see Kookaburra’s sitting around the BBQ area? Why would they do that? Why do cities often have more ibises and gulls than rural areas?

By the end of this lesson, students should have an understanding that animals perform certain behaviours because those behaviours are associated with greater success and the opportunity to have more offspring.

This is the foundation for evolution – the idea that different individuals perform differently as a consequence of their choices. You can talk about what it would mean if (in this instance) students that visited the forest and city had more offspring and that those offspring also preferred the forest and city (this is the concept of heritability). This should nicely prepare them for next weeks lesson about evolution.

This experiment can lead to a lot more discussion. Follow what interests your students. Below are some suggestions.

Ask students if they used the ‘go back to the nest‘ button – did they notice that if they used the button instead of getting injured that they would leave with all their food? How do they think that their performance wold have changed if they used that button?

What do students thin would happen if they were forced to only visit the mountains and the ocean? What would happen to their fitness, and more generally, the population of birds in their classroom? What does that tell us about habitat conservation? Is it important or not?

citizen science (1) collecting data (1) high school (1) homeschool (1) homeschooling (1) lessons (1) marine ecology (1) online (1) primary (1) program (1) science (1) Secondary (1) stem (1)
We use cookies on our website to give you the most relevant experience by remembering your preferences and repeat visits. By clicking “Accept All”, you consent to the use of ALL the cookies. However, you may visit "Cookie Settings" to provide a controlled consent.
Cookie Settings Accept All
Manage consent

This website uses cookies to improve your experience while you navigate through the website. Out of these, the cookies that are categorized as necessary are stored on your browser as they are essential for the working of basic functionalities of the website. We also use third-party cookies that help us analyze and understand how you use this website. These cookies will be stored in your browser only with your consent. You also have the option to opt-out of these cookies. But opting out of some of these cookies may affect your browsing experience.
Necessary Always Enabled
Necessary cookies are absolutely essential for the website to function properly. These cookies ensure basic functionalities and security features of the website, anonymously.
Functional
Functional cookies help to perform certain functionalities like sharing the content of the website on social media platforms, collect feedbacks, and other third-party features.
Performance
Performance cookies are used to understand and analyze the key performance indexes of the website which helps in delivering a better user experience for the visitors.
Analytics
Analytical cookies are used to understand how visitors interact with the website. These cookies help provide information on metrics the number of visitors, bounce rate, traffic source, etc.
Advertisement
Advertisement cookies are used to provide visitors with relevant ads and marketing campaigns. These cookies track visitors across websites and collect information to provide customized ads.
Others
Other uncategorized cookies are those that are being analyzed and have not been classified into a category as yet.
Save & Accept
Powered by